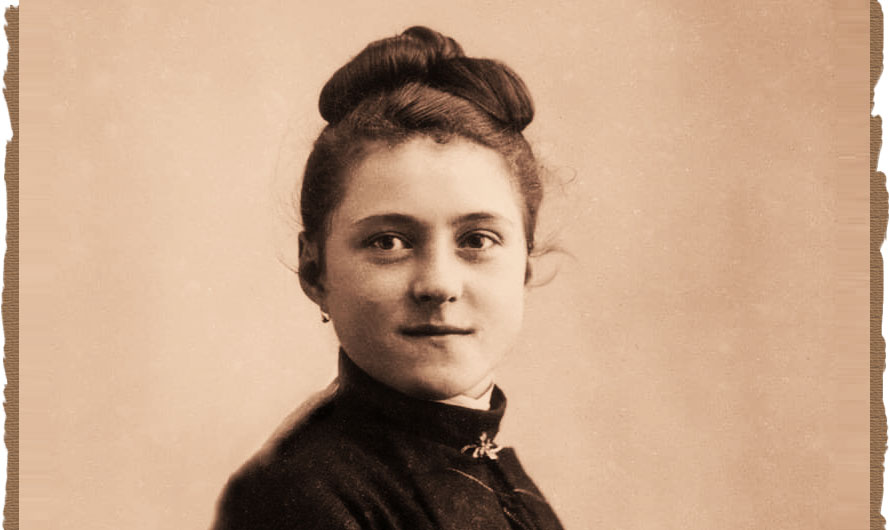 Today, October 1st, Catholics around the world celebrate the feast day of St. Therese of the Child Jesus, affectionately called, “The Little Flower.” Born, Marie-Francoise-Therese Martin, on January 2, 1873; her 24 years of life on earth were filled with sacrifice and hardship, but most of all love for our Lord and Savior, Jesus Christ.

This Doctor of the Church, described herself as being a child, who will reach heaven by the simple and small acts of love that she did for the love of Jesus. She was born to parents Louis Martin, and Nelle Guerin. During the fifteen years of their marriage, they lost four children out of nine. Nelle battled breast cancer during the time of the deaths of their four children. Therese, their youngest was a fragile child at birth with many complications, and was not expected to survive. But she surprised everyone, and gave Nelle much joy as she grew strong, lively and vivacious. By the time Therese was three, her mother, Nelle died. It was a difficult time for the family. Her father and her sisters, Marie, Pauline, Leonie, and Celine did everything they could to keep the family functioning, while spoiling Therese.

As the years past Therese grew very close to her family, but especially to Pauline who gave her daily learning instructions. When Therese was ten, her sister Pauline joined the Carmelite Order. Her leaving was very difficult for Therese. She became very sad and depressed, even to the point of illness. Doctors were unable to determine what she was experiencing based on a kidney infection with high fever, that came sporadically with hallucinations. The family was so grieved over this, that they thought they might lose her.  However, through fervent prayer to Our Blessed Mother, Therese was granted a miraculous recovery.

It’s no wonder her love for Jesus grew and her maturity blossomed in her behavior. She had this determination that her life could only thrive if she were a Carmelite.  She was successful in getting her father to take her to Rome, to speak to the Pope, when her application was denied. Her determination got her there and the last words the Pope told her, was that if God willed it, it would happen. Shortly afterwards, she received notice that she was accepted.

Therese excelled in her studies. This was recognized and she was passed to higher classes and her advancements caused much jealousy and unpopularity among the other students. After she took her vows, some sisters complained and many made life difficult for her. She was given duties beyond the norm; she wrote much, and let nothing interfere with her prayers and those of the community prayer life of the cloister. Superiors appointed her to instruct the novices of the community. She did small tasks with incredible love.

Influenza hit the country and Therese did not escape it. Her illness left her weak and frail. While Therese was unable to perform her normal convent duties, the prioress forced her to write the manuscript of her memories, which were filled with wisdom and peace. She had a great love for the Child Jesus and promised she would send roses to souls from heaven.

Within months after her death on September 30, 1897, reports were received at Lisieux of many, many favors and graces received attributed to prayers of intervention to Therese. The book “Story of a Soul” was published in October, 1898. Her Canonization took place on May 17, 1925.