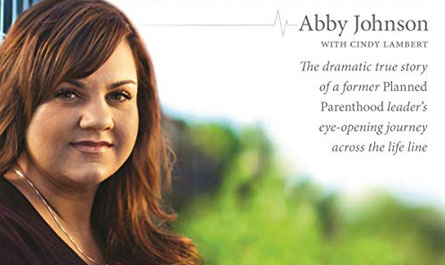 by Abby Johnson: A Dynamic Conversion

Throughout the history of the Catholic Church, from the time of St. Paul down through the centuries to modern times, some of the most dramatic and incredible conversions to our faith have involved men and women who had led lives antagonistic to Christian values, whom others may have thought the most unlikely to convert to Catholicism. A recent example of this is the story of Abby Johnson, who went from being a strong supporter of abortion rights and highly celebrated leader in Planned Parenthood, to a passionate pro-life advocate for the unborn.

Abby Johnson was born into a close-knit conservative family in the small town of Rockdale, Texas. She was raised with strong moral, Christian values which recognized the sanctity of life and believed that sexual intimacy was only for marriage. She and her family regularly attended church, and she was active in a church youth group. She was also an excellent student in the top 10 percent of her class and was involved in many school activities. However, her values and behavior changed when she left her hometown to attend college at Texas A & M University, about 55 miles from Rockdale.

It was while at Texas A & M, a period during which Abby described herself as “so young, naïve, and unaware”, that she met a representative from Planned Parenthood during a volunteer fair held on campus. Abby was told that Planned Parenthood was concerned about women’s health and wanted to reduce the number of abortions by preventing unwanted pregnancies. She resonated with this message of helping other women in crises and signed on as a volunteer at their Bryan, Texas clinic. It was not until much later that she realized that she had been deceived by lies.

Abby began an intern position at the Bryan clinic by meeting clients as they arrived in their cars and quickly escorting them inside the facility. The clinic was surrounded by a high metal fence, and she noticed that there were pro-life groups on the other side of it. She was told by the clinic staff that they were there to threaten and intimidate innocent women who needed help. Abby was appalled at this, and she did notice some pro-lifers holding judgmental signs and pictures, one of whom was even dressed as the Grim Reaper. Abby says that these more hostile protesters actually unified the clinic staff in their resolve to continue their work.

However, it was another group outside the fence, known as the Coalition for Life, which made a lasting impact upon her by the way they offered prayers, hope, alternative solutions, and support in a peaceful and loving manner. They constantly tried to help the women who came to the clinic and unceasingly prayed for Abby and others.

After she graduated from college, Abby assumed a full-time position at the Bryan clinic, becoming its media relations representative and eventually its director. She ran the clinic in a very efficient manner, and it was recognized as a model for others to follow. She was named the Planned Parenthood Employee of the Year for her efforts.

However, she became disillusioned after attending an organization boardroom meeting where it was dictated to her and other staff members that they needed to increase the number of abortions to generate greater revenue. But her turning point finally came the day when she was asked to assist in an ultrasound-guided abortion, and she was horrified and sickened by what she witnessed on the screen during the procedure.

She abruptly left the clinic and immediately went into the headquarters of the Coalition for Life group, whom she had been in opposition to for eight years. They embraced her with open arms and love.

Abby suffered greatly during her faith journey. She was betrayed by close friends at the clinic, endured malicious and unjust legal action, and she and her husband Doug were rejected by two churches they enjoyed attending, the first one because they were opposed to her work at Planned Parenthood, and the second (a pro-choice Episcopal church) after she left that organization and became pro-life.

Abby’s poignant and inspiring story is so compelling because she was on “both sides of the fence”, literally and figuratively. She shares her journey and the struggles she faced in her moving autobiography titled “Unplanned” (which was also made into a movie and is available on DVD and Blu-ray). Abby’s story serves as a witness to the power of persistent prayer and the hope, love and forgiveness which comes from God through others.

(Note: Following the first edition of Unplanned, Abby and her husband Doug converted to Catholicism.) 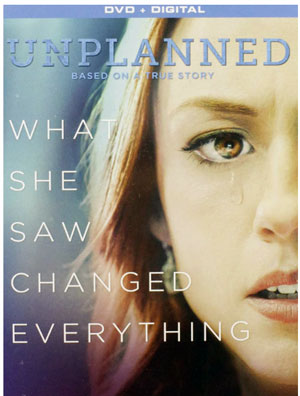 Abby Johnson’s story as described in her book “Unplanned” shows the importance of persisting in prayer and trusting God in even the most difficult and seemingly hopeless situations. One of the incredible events described in the book was the eventual closure of the Bryan abortion clinic!

The movie Unplanned, based upon Abby’s book and now available on DVD and Blu-Ray, features a considerable amount of bonus material, including interviews with her and the cast and crew. In one segment, the producers talk about the miracles they experienced on the set throughout the making of the movie. One of the most astonishing stories they related involved a donor who bailed them out at the last minute.

They related the financial difficulties they faced completing the movie. They were one million dollars short late on a Friday afternoon and they desperately needed this money by Monday morning to keep their investors and backers from pulling out of the project. If that happened, they would lose everything they had invested, which amounted to millions of dollars. Time was running short, and their bank was closing in half an hour. They truly trusted God, stating “Thy Will be done”. Suddenly, the phone rang and a businessman flying over them in his private jet asked them for their bank routing number, saying that “Jesus told him to give them a million dollars”. Hesitant at first, they were finally persuaded to give him the number, and within minutes they had the million dollars they needed.

Who was this mysterious donor? He was Mike Lindell, “The Pillow Guy”! (As you watch the movie, see if you can spot him in his role!)