The twentieth century didn’t come in much like a lamb. In the earliest years we had wars, countries forming, countries dissolving and the rise and fall of empires. The 20s brought us the Stock Market Crash and the rise of dictators such as Mussolini and Stalin. Starvation and unemployment were running rampant. It had been hoped that there would be peace in the world after the World War, yet there was none. People were beginning to leave the Church because of perceived non-relevant teachings and turn to anyone who promised them a better world.

Pope Benedict XV had warned about this prophetically in 1920 when he wrote, “There can be no stable peace or lasting treaties, though made after long and difficult negotiations and duly signed, unless there be a return of mutual charity to appease hate and banish enmity.”1 A newly ordained Pope Pius XI took note of this and began to look into bringing people back to the Church. With some regimes having totally removed Jesus from their countries, something needed to be done to bring Christ back, especially to these peoples.

1925 was proclaimed the Jubilee Year of the Council of Nicaea by the Church. The Church affirmed and acknowledged again the council’s wisdom in what was founded in Jesus Christ, the Son being One with God the Father, as Jesus shared in His Divinity. We restate this, which would become the Nicene Creed, weekly as our Profession of Faith. However, the Pope found that more needed to be done. On December 11, 1925 Pope Pius XI declared the Quas Primus that would declare the addition of a new feast day of Our Lord Jesus Christ the King, and the Liturgical Calendar was updated.

This would become what we now know as the Feast of Christ the King. This feast day was originally set to be observed in October on the last Sunday of the month. But since it was held near All Saints Day, four weeks before the beginning of Advent, Pope Pius was able to help the people remember that Christ is not only King of all on Earth but also of the Eternal Kingdom. The congregation was instructed to use this Feast Day to consecrate themselves to the Sacred heart of Jesus, living Christ in the Eucharist, and to make amends against the atheism that was spreading across the world.

In 1969 some changes were made to the feast day. Pope Paul VI changed the name to better reflect the thinking behind the feast to Our Lord Jesus Christ, King of All. It was also this year that the day was changed to the last Sunday of the Church Year. This was done to align the Feast day with the Kingship of the Lord and the coming of the Lord at the beginning of Advent.

What is the Kingdom that belongs to Christ? We have to remember what the Bible tells us. Luke 17:20-21 gives us a hint: “Once, the Pharisees asked him when the kingdom of God was coming. He answered, “The coming of the kingdom of God will not occur with signs that can be observed. Nor will people say, ‘Here it is,’ or ‘There it is.’ For the kingdom of God is in your midst.” 2

As the Feast of Christ the King, or Feast to Our Lord Jesus Christ, King of All comes up at the end of the month keep in mind what special Kingdom you belong to. It is the most precious of all. 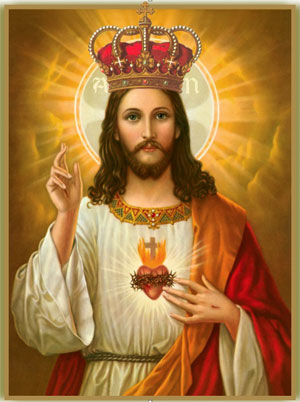 In these first two Christian millennia, countless peoples have received the grace of faith, brought it to flower in their daily lives and handed it on in the language of their own culture. Whenever a community receives the message of salvation, the Holy Spirit enriches its culture with the transforming power of the Gospel. The history of the Church shows that Christianity does not have simply one cultural expression, but rather, “remaining completely true to itself, with unswerving fidelity to the proclamation of the Gospel and the tradition of the Church, it will also reflect the different faces of the cultures and peoples in which it is received and takes root” -Pope Francis