Some of the greatest stories of conversion to the Catholic faith throughout history have involved individuals who at some point led lives completely opposed to God and His commandments, yet experienced His love and truth through His Son Jesus Christ, and became shining examples of faith for all of us. One more recent example of this is Sohrab Ahmari.

Sohrab Ahmari was born in the Islamic Republic of Iran, six years after the Iranians overthrew the shah’s benign autocracy and replaced it with the Ayatollah Khomeini’s Islamic regime. He was the only child of parents who were only superficially religious, although he was exposed to the teachings of Islam in the public school he attended. They lived with his maternal grandparents who, although not completely devout Muslims, did adhere to some of Islam’s tenets.

It was during a family vacation while he was in middle school that he observed the hypocrisy of the Islamic “morality police” when he saw them take bribes for allowing the drinking of alcohol, which was prohibited in that country. This event, plus the brutality of Shiite law imposed upon the Iranian citizens, caused him to question this religion, as well as God Himself. He cursed God and denied His existence when he was still a pre-teen. He carefully tempered this unbelief while in school, but was very rebellious toward his teacher of the Qur’an, the Islamic holy book.

In the fall of 1998, when he was in the eighth grade, he and his mother immigrated to the United States to stay with his uncle in Utah. He had envisioned the United States to be his idea of a society, completely secular without any religious influence. He was disappointed to find that faith was openly practiced, particularly in Utah with a heavy Mormon influence. He rebelled against this by distancing himself from the mainstream students, dressing completely in black, and deliberately attempting to offend others with his comments.

While still in high school, Sohrab discovered the works of existential authors such as Nietzsche, Jean-Paul Sartre, and others. He was impressed with their anti-religious stance and resonated with their atheistic message. He eventually embraced Marxism, even though this was ten years after the end of the Cold War and its message had been utterly discredited. While attending Utah State University, he joined a communist organization named Workers’ Alliance and transferred to the University of Washington in Seattle, to be near their headquarters. Following graduation, he became a teacher for an organization called, Teach For America.

During these years, he often abused alcohol and lived a life devoid of morality, seemingly with no regard for the consequences. It was during a weekend teacher’s conference in New York City, following a night of overindulgence in alcohol, when he had an extraordinary spiritual experience. While walking around Penn Station waiting for his train to depart to Boston, feeling the shame and self-disgust from his behavior over the weekend, he passed a Catholic church repeatedly, finally going inside while the evening Mass was being celebrated. He didn’t participate at all in the Mass, remaining seated in the back of the church. However, he experienced an extreme feeling of peace during the Eucharist which caused him to break into tears, even though he didn’t fully understand the sacrament. Following another similar encounter with the Mass, he could no longer truthfully describe himself as an atheist.

He observed that Western democracies were morally superior to others due to their Judeo-Christian foundations. He saw the evil and deceit of Marxism and in other secular philosophies. Following a trip as a reporter to Istanbul, Turkey, during which he observed the depths of human misery, degradation, and sin, he realized that only Jesus Christ could save his soul which had been trapped in an infernal prison.

In his search for God through His Son Jesus, he attended an Anglican church but realized that it lacked what he had experienced in the Catholic Mass. He savored the Mass of the Faithful and envied those who were lined up at the altar to receive the Blessed Sacrament. It was only the Mass which brought him to faith in the Real Presence. As he states: “…I concluded that Catholicism was Christianity in full, while other forms of Christianity were digressions from this fullness”. After six months of instruction from a priest, he was baptized and confirmed into the Catholic Church on December 19, 2016.

He tells the story of his remarkable and moving conversion in his autobiography From Fire by Water, which offers hope to anyone struggling with their faith and relationship with God. 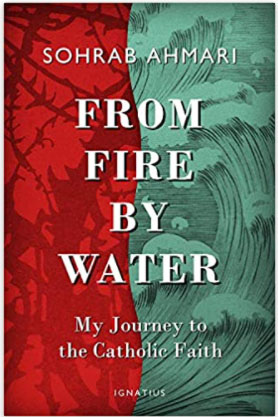