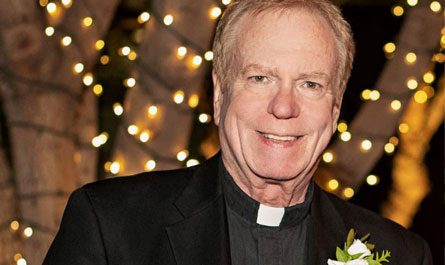 Ordained on June 2, 1984, at Saints Simon and Jude Cathedral in Phoenix, Father Jim Turner celebrates 38 years in the priesthood this year. A quiet, steady voice brings a peaceful air to the conversation as Father Jim graciously shares details of his life. Father retired in 2020, though it may not be that apparent as he still celebrates Mass and continues to support St. Elizabeth Seton Parish.

The third of six children, Father Jim Turner was born and grew up in Long Island, New York. He was baptized and raised in the Catholic faith, something his Catholic mother ensured and his father, not Catholic himself, always supported.

After high school, he began his college studies at Syracuse University. During this time in his life, Father Jim describes himself as “faithless” because he was no longer attending church. In his second year at school, he started going to the Newman Center which re-energized his spirituality. He completed college and obtained a Liberal Arts degree with an emphasis in Spanish, yet had no idea what he wanted to do with his education or what direction his growing faith would take him. He ended up moving to Flagstaff where a sister had previously relocated and where, eventually, all of his siblings would settle. Father would go on to earn a certification in Secondary Education which would allow him to teach Spanish to high school students, though he decided this wouldn’t be a good fit. He continued to reflect upon where his faith would lead him and then had the opportunity to attend St. Meinrad Seminary and School of Theology (Benedictine House) in Indiana. He lasted only one year. Taking two years off, Father worked at several different jobs to include a position with Goodwill. Still searching for a clear path, he came to realize his struggles were helping him “see my faith and God in my life,” and ultimately led to a life devoted to the service of God.

Father believes his most important job as a priest is “helping people discover that God is with them all along.” He references and admires the life of St. Teresa of Avila who faced life challenges and struggled with her faith, as many people experience, and through prayer

learned “to keep the faith” and how necessary it is to “stay at it.” When speaking about what consistently inspires him, reaffirms and strengthens his own faith, Father says it’s observing how others live their faith. Some of the most powerful moments for him have been meeting and “working with those experiencing their darkest moments,” times of trouble, sickness, and grief. Father Jim recalls, years ago, meeting parents whose child was in a hospital ICU after being seriously injured in an accident. Though confronting a heart-wrenching time, the parents’ demeanor and conduct allowed Father to witness “ordinary people living their lives well…no matter the circumstances.” Even decades later, their relationship has remained close.

Reading fiction, especially mysteries and spy novels, is one activity Father finds enjoyable. However, cooking for and entertaining friends is a pastime he truly takes pleasure in, something he put on hold because of the pandemic. Father favors Italian food and was influenced during his stint working in an Italian restaurant during his high school years. He also likes preparing his own “version of Asian food” and whether Italian or Asian, has fun coming up with his own recipes and tasty combinations. Father Jim will continue to find opportunities to share his interest in cooking, gathering with dear ones, and keeping the faith.

One thought on “Father Jim Turner, A Peaceful Gracious Voice at SES”

During our conversation, Father Jim mentions that he finds the “modern” saints more relatable. Contemporary saints, such as Saint Oscar Romero and Saint Teresa of Calcutta, were examples of people who lived lives as Disciples of Christ and were seen and heard doing so through photography, film, and recordings, unlike older saints. Through expansive multimedia and ready access, present day Catholics can witness firsthand, and be inspired and informed by, the lasting and profound effects of the saints’ acts of holiness in the world of today. 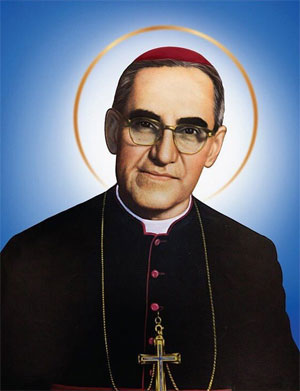 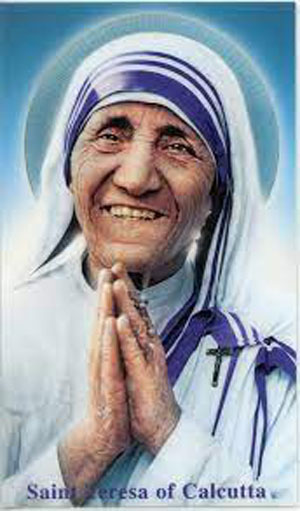 One thought on “Father Jim Turner, A Peaceful Gracious Voice at SES”