After serving our community with a compassionate loving heart

St. Elizabeth Seton has many wonderful ministries which serve a variety of important needs in a Catholic Faith community. One of the most important and difficult of these is the Funeral Ministry, which has been led by Joan Richards for the past 15+ years under three pastors: Father Frank Bartel, Father Joseph McGaffin, and presently, Father Kilian McCaffrey.

Joan and her husband Ted were originally from Marion, Ohio, and they moved to Arizona in 1976 due to Ted’s transfer in his position as a salesman for Marion Power Shovel Co., which sold repair parts to the copper mining industry. They moved into Westbrook Village in 1986, and joined St. Elizabeth Seton parish in 1987 because of their friends and its proximity.

Joan and Ted were literally together from the time they were infants. Their families were friends and were very close, and socialized with each other before they were even born. Ted’s family were devout Catholics who attended Mass regularly, while Joan’s family was not religious and did not go to church. Joan was heavily influenced by Ted’s family in the Catholic faith. Her best friend was Ted’s sister, and Joan was her maid of honor at her wedding. Joan decided to become Catholic and was baptized during her senior year in high school. Ted did not attempt to influence this decision; this is something she wanted to do on her own. She and Ted were married in 1951, and after 57 years of marriage, Ted passed away in July, 2008. They had three children (two sons and a daughter), four grandchildren, and seven great-grandchildren. Her son Kevin lives in Arizona.

Joan became involved with the Funeral Ministry under Father Frank Bartel. She began as a greeter, along with Father Bartel’s sister-in-law Debbie Bartel, who was then in charge of this ministry. Since taking over this ministry, her tasks are many. The activities begin once she receives an email from Steve Raml, our parish Liturgy and Music Director, informing her of an upcoming funeral. If the family intends for its members to do the liturgy readings, she must make sure they know how to do them and that they are aware of where the ambo is from where the liturgy is proclaimed. Otherwise, she must arrange for a lector herself. She also arranges for two greeters at the back of the church who pass out worship aids to those attending the funeral, designate pews with reserved signs in the church for the immediate family, make sure that there are tissues in the pews, set up a stand with a book for attendees to sign-in, arrange memorial cards and family pictures on a table in the back of the church, and arrange flowers on the alter along with sacristan Karlene.

All of these tasks require someone who is compassionate, empathetic, understanding, patient, caring, and flexible, along with having good organizational skills and the ability to work with a variety of families. She sometimes has to gather the family members into place minutes before the funeral Mass is to begin, making sure those who are lectors and those that bring up the Offertory Gifts are prepared. Joan says that one of the most difficult funerals to do is that of friends she has known.

Besides the Funeral Ministry, Joan and Ted were also part of RCIA at St. Elizabeth Seton, and she loved being involved with this ministry. She also helped with Coffee Sundays.

Joan retired from the Funeral Ministry June 1, 2022. She is sad about leaving this ministry, but after so many years of having to re-schedule her own personal appointments and other commitments due to their disruption from an unexpected funeral, she feels that it is time to pass this ministry to another.

Our entire parish owes a great debt of thanks to Joan Richards for her untiring commitment to serving so many families in our faith community during their most difficult and trying times. She is someone who has given of herself very unselfishly for many years, and her service to our parish will be missed. 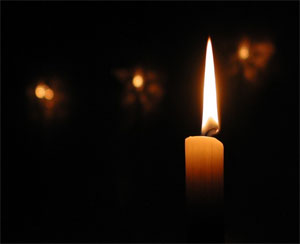 This most difficult and most necessary ministry calls those who have a compassionate heart to help our family members in their most sensitive moments. If you feel called to be with parishioners during this time of need, please consider volunteering as a funeral minister.