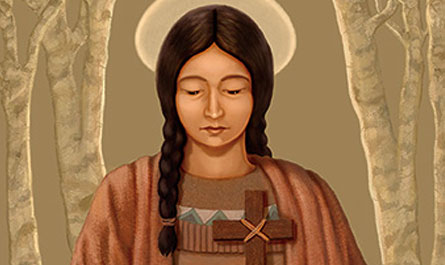 The 17th century for the Kanien’Kehaka (Mohawk) people was a tumultuous time in history. The Dutch and Mohawk monopolized the Mohawk Valley in fur trade, allowing for the indigenous people to become quite wealthy, only to later be stricken with smallpox brought in from Europe. The English and French were in constant war with each other to take command of the New World and would send the natives to reservations away from their homeland. This is the world that Tekakwitha came into.

Born in 1656 in Ossernenon, present-day Fonda, NY, Tekakwitha became a survivor of one of the tribe’s smallpox outbreaks. Everyone in her immediate family passed and so she was raised by her aunts and uncle. She was not unscathed as she was left with pockmarks all over her face and her eyes became extremely sensitive to sunlight. As such, she would wear a hooded blanket over her as she groped her way about. Tekakwitha has a translation of “the one who walks groping her way”.

This village also had a Jesuit mission where Tekakwitha would learn about Christianity. She enjoyed the idea of Jesus and His works and miracles so much that, at the age of twenty, she was baptized into the faith with the baptismal name of Catherine, translated into her native tongue as Kateri.

The Mohawk tribe was very close to Mother Earth, and she would oftentimes go to the woods to pray to God. In the village, however, her people would throw rocks at her and taunt her after she was baptized. The Catholics were not looked upon as good people. After getting death threats, she moved two hundred miles north from her village to St. Francis Xavier in Sault Saint-Louis near Montreal. Here she was welcomed by other Mohawks who had joined the Christian religion. It was somewhat a combination of following Jesus while still observing their own indigenous ways. For instance, they still celebrated the Strawberry, Seed and Harvest ceremonies.

The Mohawks would chastise their bodies and performed self-flagellation. Kateri led a penitent life of virtue that included adding ash to her food so she wouldn’t enjoy the taste. The “Holy Woman” was loved by all as she taught the children and helped the poor and sick. By 1679 Kateri decided to take a vow of perpetual virginity, fully devoting her life to Christ. It was reported by those near her that her whole self was transformed into a beautiful, quiet source of pure love in the presence of Christ. For twenty-four hours a day the Lily of the Mohawks, another name attributed to her, would be in adoration of the Holy Eucharist. At the young age of 24, on April 17, 1680, Kateri Tekakwitha died. Her last words? “Jesus, I love You.”

Apparitions of Kateri were observed only a week after her death. In 2006 a five year old boy in Washington State who had a wrist bone relic of Tekakwitha was able to recover from a flesh-eating infection after prayers were made to Sister Kateri. This was the act that led to her canonization on October 21, 2012. 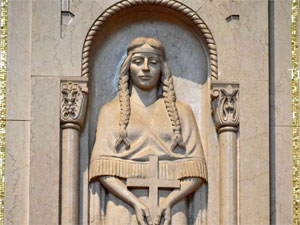 O Saint Kateri, Lily of the Mohawks,
Your love for Jesus,
so strong, so steadfast,
pray that we may become like you.

Your short and painful life
showed us your strength and humility.
Pray that we may become
forever humble like you.

Like the bright and shining stars at night,
we pray that your light
may forever shine down upon us,
giving light, hope, peacefulness
and serenity in our darkest moments.

Fill our hearts, Saint Kateri Tekakwitha
with your same love for Jesus
and pray that we may have the strength and courage
to become one like you in Heaven.

Through Christ our Lord. Amen