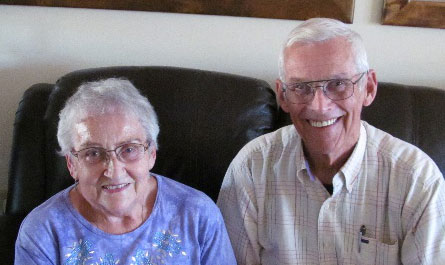 On any given day, Deacon Jim Brown might be spotted strolling along Palmeras Drive on his way to or from St. Elizabeth Seton. While walking the half-mile between his residence and the church, he recites the rosary. Deacon Jim appreciates the opportunity to get in his daily exercise of walking and trying to achieve his personal goal of a minimum of 10,000 steps per day; while using that time in prayer and meditation.

Deacon Jim smiles warmly and often, speaking in a quiet voice as he shares his personal history. Born in Salt Lake City, Utah, on September 30, 1940, to a Mormon family that consisted of five half-sisters, his parents divorced when he was eight years old. After his father was given custody of him, he moved to Massachusetts, and began to attend the Congregational (Protestant) Church. Later, during his early high school years, Deacon Jim came to live in Arizona, where his father, a military man, was stationed at Fort Huachuca, in Sierra Vista. After meeting Betty, a transplant to Arizona from Pennsylvania, Deacon Jim began to explore the idea of becoming Catholic. He credits Betty and her father, a family of devout Catholics, for inspiring him to explore the steps necessary to join the church. It was through “example in the way they lived their lives,” and Betty’s desire to be married in the church, that he came to appreciate the beauty of the Catholic faith. Deacon Jim describes the Catholic tradition as having a “fullness” celebrated through the Mass, which “is as close to heaven as we’re going to get here on earth.” At the age of 21, and after completing the required education process, Deacon Jim was welcomed into the church, and he was baptized at St. Thomas the Apostle Catholic Church in Phoenix.

Deacon Jim has much to be proud of. He is a retired veteran who served 20 years in the United States Navy and he worked for 10 years as an Electrical Engineer for Electric Motors. But it is his 60-year marriage to Betty that causes his face to light up. Their union was blessed with three children, Michael, Wendy, and Cheryl (who died at 4 days old). There are four much adored grandchildren ranging from 12 to 30 years in age.

The decision to become a deacon was influenced by his joy in working with youth groups and, at the suggestion of a priest, he made the commitment to participate in the four-year program. Ordained as a deacon in Prescott, in 1987, Deacon Jim served at Immaculate Conception in Cottonwood, for 17 years prior to moving to the Sun City area in July of 2021. Although still settling in at their retirement residence, he and Betty are enjoying their new surroundings and becoming acquainted with their neighbors. When not fulfilling his responsibilities at St. Elizabeth Seton, Deacon Jim enjoys grilling and claims to make a pretty tasty salmon that even Betty, who does not particularly like fish, gives her stamp of approval. He also enjoys woodcarving, creating smooth, varnished “comfort” crosses and birds, that he then donates to hospice patients for stress relief.

As we begin to wind up our conversation, Deacon Jim says he and Betty are beginning to feel at home in their new parish. He says he often thinks of something his grandmother said to him when he was a little boy, “Remember, always you can talk to God and you’re never alone.” Deacon Jim says these simple words have always brought him comfort and they can work for anyone. With that, Deacon Jim begins his prayerful stroll home. 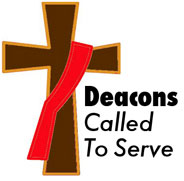 On June 18, 1967, Pope Paul VI issued “Sacrum Diaconatus Ordinem,” that established the permanent diaconate for the Western Church. In May of 1968 the Roman Catholic bishops of the United States petitioned the Holy See for permission to restore the diaconate in the United States. On August 30, 1968, Pope Paul VI acceded to their request. * *Diocese of Phoenix

The word deacon is derived from the Greek words diakona, meaning service, and diakonos, servant. Deacons can baptize, witness marriages, perform funeral and burial services outside of Mass, distribute Holy Communion, preach the homily (which is the sermon given after the Gospel at Mass), and are obligated to pray the Divine Office (Breviary) each day.