Sister Mary Beverly greets me with a bright smile and invites me into a small, cozy office. She asks if there’s anything she can get me, “How about a bottle of water?” Sister exudes warmth, friendliness and truly has a gift for making people feel welcome.

Born in Los Angeles, California, as a third generation Japanese American (her maternal and paternal grandparents were born in Japan), Sister Mary Beverly is the oldest of her 3 siblings, a younger sister and 2 brothers. She was raised in a family that had “no true religion,” and was first exposed to the Catholic faith through Nina, a little girl who lived next door. Nina had been well-instructed by her devout Catholic father and soon Nina began to share her knowledge about Catholicism, how to make the sign of the cross, pray the Our Father, recite the rosary, and she explained the Catholic mass, among many other lessons. Their sessions together took place almost daily, sometimes while sitting high in a tree, as it became the girls’ “special time to talk about Jesus.” One day Nina explained that her baby sister was to be baptized and Sister decided that she, too, wanted to be christened. So, at the age of 7, Sister was “baptized” with the water hose in Nina’s front yard. “Well,” Sister laughs remembering, “the intent was there.” One day Nina showed Sister a picture of the Sacred Heart of Jesus and the impact upon Sister was profound. Sister recalls thinking she wanted Jesus “stuck in her” and so, at 9 years old, she resolved to become a Catholic nun. Although at first her parents were uneasy with her decision, Sister persisted in pursuing her journey and on February 19, 1972, Sister Mary Beverly was baptized as a Catholic with her parents and grandparents in attendance.

It soon becomes apparent that Sister possesses a single-mindedness in achieving all of her endeavors and this is no less true when it comes to education. She was trained as a Cardiac Nurse at Los Angeles City College; has earned a BA in Psychology from Marymount Fordham; and is currently working on a master’s degree in Dogmatic Theology from Holy Apostles College and Seminary in Connecticut. Sister brings the same energy and devotion to her service to God through her years of work in consecrated life. She was a member of the Maryknoll Sisters from 1987 through 2010. The Maryknoll Sisters give witness to God’s love and devote their lives in teams of missionaries, serving in some of the remotest parts of the world. Sister served for 11 years living and working in the Darien Panama Jungle, and she describes having to ride horseback, sometimes a five-hour journey, to reach the poor farmers and small tribal communities, to train local lay leaders and catechists. Since 2010, Sister Mary Beverly has been part of the Parish Visitors of Mary Immaculate Order. The heart of their charism is a combination of contemplation and person-to-person missionary outreach. I asked Sister what door-to-door evangelization entails and she quotes Pope Francis, “The Church must be in the streets: seek the people, go to homes, visit families, go to the outskirts.” This is exactly the work Sister does, knocking on doors to, “encourage Catholics no longer attending, to come back to the Church.” She is fulfilling God’s call to seek out “the lost sheep” and call them home.

Our interview has run a bit long causing Sister to be late for prayers. Sister is unperturbed; smiles kindly and invites me to prayers, too. There, again, is Sister’s untiring, ever-present welcoming spirit shining through. 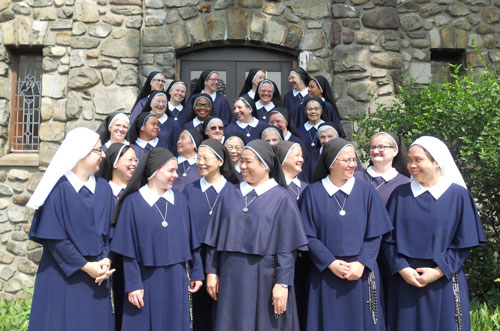 If you would like to learn more about the Parish Visitors of Mary Immaculate, you can contact the Vocation Directress, PO Box 658, Marycrest; Monroe, New York 10949-0658; call them at 845-783-2251; or visit their website at parishvisitorsisters.org.

If you are interested in more information about consecrated vocations, you may contact the Diocese of Phoenix, Office of Consecrated Life at 602-354-2472 or visit their website at dphx.org/consecrated-life.