All Souls Day is celebrated by the Catholic Church every year on November 2nd. As this falls the day after the Feast of All Saints, which is a Holy Day of Obligation, sometimes All Souls Day is not accorded the same recognition and importance that is attributed to All Saints Day. However, in the eyes of many, the honor, reverence, and prayers offered in our observance of All Souls Day may actually be more vital to paving the way to eternal rest in Heaven for our loved ones.

In Catholic theology, we believe that when we die, our soul will be transported to one of three different places. The first is Heaven, where all souls that die in a state of perfect grace and in communion with God are welcomed into His Heavenly Kingdom. The second is Hell, where all souls that die in a state of mortal sin are damned for eternity, condemned by their own choosing and the life they lead on earth. The third is Purgatory, an intermediate step to Heaven, where souls who are free of mortal sin, but still in a state of venial (lesser) sin, are sent until their souls can be cleansed and perfected before entering Heaven for eternity.

Biblical foundation for praying for the souls of our dead is found in 2 Maccabees:

“Turning to supplication, they prayed that the sinful deed might be fully blotted out…. Thus he made atonement for the dead that they might be freed from this sin.” (2 Mc 12:42-46)

While the doctrine of the Catholic Church may have recognized the importance of praying for the souls of our departed brothers and sisters, there was no formal celebration and remembrance during the first 1000 years of the church’s existence. That all changed around 1030 AD, when a Benedictine monk named St. Odilo began setting aside November 2nd as an annual day for All Souls, where prayers, alms, and sacrifices were offered for the relief of suffering souls in purgatory. At first, this was only practiced at the monastery in Cluny, France, where he served as Abbott for over 50 years. However, St Odilo quickly incorporated the practice into all of the monasteries under his jurisdiction.

According to historical documents, after Pope Benedict VIII died, he appeared to John, the Bishop of Porto, and two friends, asking that they inform Odilo to pray for his soul that remained in purgatory (Odilo and Pope Benedict had been close friends). Odilo instructed all of the Cluniac houses to offer up prayers, Masses, and alms for the soul of the dead pope. Not long after, it is said that a figure of dazzling white entered the cloister and knelt in front of Odilo, informing him that he was the pope and that he had been freed from purgatory through the prayers and intercessions offered on his behalf. Not long after this, the practice of commemorating All Souls Day was adopted by the entire Benedictine order, as well as the Carthusians. Other orders, such as the Dominicans, also began celebrating this feast day with traditions of their own, with each priest in the order celebrating three Masses on that day. This practice soon was adopted by the entire Catholic Church.

At St. Elizabeth Seton Parish, a Mass of Remembrance is said on every All Souls Day. During the Mass, the names of all of our parishioners who have died in the past 12 months are read aloud and prayed for by the entire congregation. Many family members and friends of the deceased are in attendance, and candles are lit and presented to them. It is a beautiful way for our parish community to not only remember our loved ones, but to also help usher them into their final heavenly reward so they can truly Rest in Peace.

Just outside of Chicago, in the town of Berwyn, is St. Odilo Parish. Originally founded in 1928, it is the only church in the United States to be designated as the National Shrine of the Souls in Purgatory. 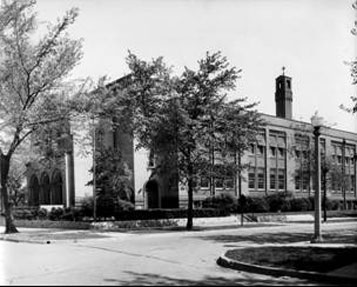 At the first Mass celebrated in the new church on November 4th that year, Cardinal Mundelein granted special privileges to St. Odilo Parish to give a 200 day indulgence applicable to the souls in purgatory for each visit to the new church. A shrine for the poor souls in purgatory was built in the church, and weekly devotions were held in their honor. The parish grew quickly, and soon a new church was needed to accommodate the population of the parish. 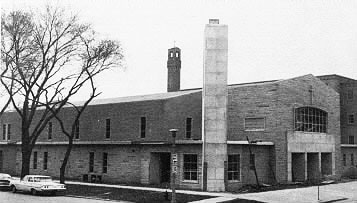 The new St. Odilo Church was opened in 1963, and the old church building was converted entirely into a school (prior to that, school classrooms were located on the second floor above the church). The new church has many beautiful stained glass windows, with an amazing one depicting St. Odilo above the choir loft. If you are ever in the area, a visit to this parish is well worth the time.