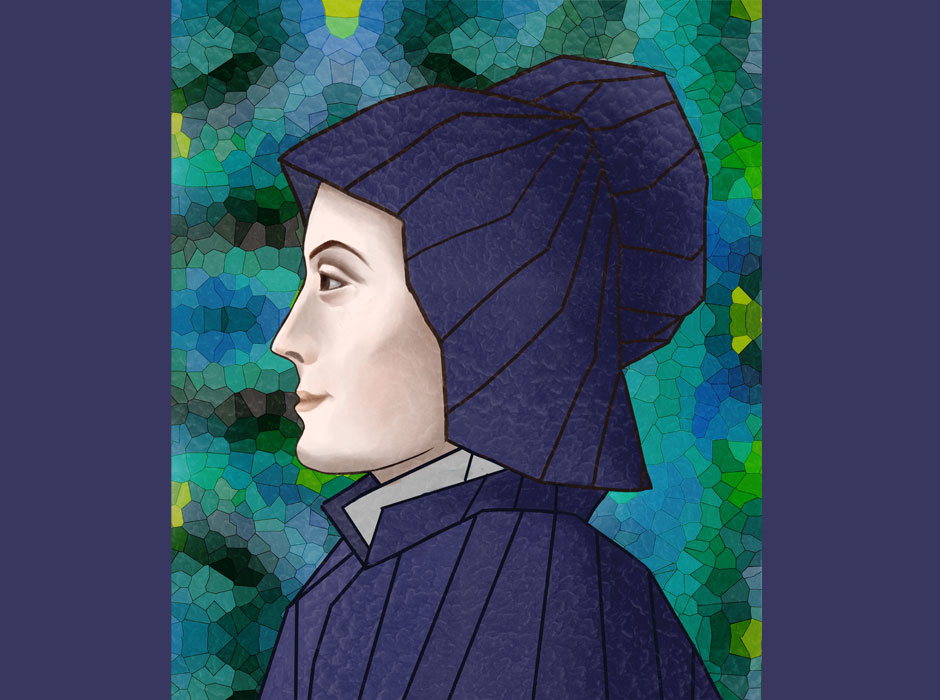 The life of the patron saint of our parish was an incredible spiritual journey of persistent and enduring faith and hope in the face of difficult times and tragedies, culminating in her canonization as the first saint born in the United States.

Elizabeth Ann Bayley was born in New York on August 28, 1774, the charming and dainty second daughter of a socially prominent couple, and was raised in what would eventually be known as the Episcopal Church. Her father was a physician who served as the Chief Health Officer of the Port of New York. Elizabeth grew up into a beautiful and vivacious young lady who was an accomplished horsewoman, a fine musician, was fluent in French, and was very popular in the East Coast society into which she had been born.

The first misfortune Elizabeth suffered was that of her mother Catherine’s death when she was just three years old. Following this, her father eventually married Charlotte Amelia Barclay in order to provide a mother for his two daughters. He and his second wife had five children but eventually separated. Elizabeth’s stepmother then rejected her and her older sister, resulting in a time of darkness for her during which she grieved the loss of this second mother.

When Elizabeth was 19, she married William Magee Seton, 25, who came from a wealthy family involved in the international import trade. Their new life began hopefully, with her giving birth to a daughter Anna Maria and a son William II, and eventually the couple would have five children. But soon after the birth of her second child, her husband William began experiencing serious health issues with tuberculosis, and following the death of her father-in-law, the family’s financial status rapidly declined into bankruptcy during the volatile economic climate of that time. Then her own physician father succumbed to the yellow fever epidemic which ravaged New York. Throughout these troubles, Elizabeth turned to Scripture and wrote in a letter that her soul was “sensibly convinced of an entire surrender of itself and all its faculties to God”.

On the advice of doctors, Elizabeth and her husband and oldest child Anna Maria traveled to Italy to visit friends and business associates in the hope this would help his condition. However, due to the yellow fever pandemic in New York, they were immediately quarantined for over a month outside the city and endured cruel suffering in a cold stone tower. William’s condition grew worse, and he passed away two days after Christmas at the age of 37.

While waiting to return to America, Elizabeth and her daughter were taken care of by the Italian families of her husband’s business partners, and they also introduced her to Catholicism. The emphasis in the Catholic Church on the Real Presence of the Body and Blood of Jesus Christ in the sacrament of the Eucharist (which had been missing in her previous Episcopal background) deeply moved her, and it was at the very heart of her eventual conversion.

Elizabeth returned to America impoverished and dependent upon the generosity of friends for a place to live. She became increasingly interested in the Catholic faith, and was eventually received into the Catholic Church on March 14, 1805 after first spending a period of time agonizing over this decision. Elizabeth experienced hostility when news of her conversion spread, and she lost the support of her friends.

She eventually moved to Maryland to accept a teaching position, and later founded the first congregation of religious sisters in the United States, initially called the Sisters of Charity of St. Joseph. This religious community was dedicated to the care of children of the poor, and its school was the start of the Catholic parochial school system in this country. Elizabeth spent the remainder of her life leading and expanding her newly founded congregation before she was stricken with tuberculosis. After a painful period of suffering, she passed away on January 4, 1821.

St. Elizabeth Ann Seton was canonized as the first American-born saint by Pope Paul VI in 1975. Her feast day is January 4, the anniversary of her death. Numerous schools and a hospital were founded by her congregation. She accepted trials and hardships with a faith and hope in God which grew stronger throughout her life. One of her many quotes which serves as an example of her faith and perseverance is “Do what we can and God will do the rest. What seems so impossible to nature is quite easy to grace”.

One thought on “Getting to know our patron saint”

One thought on “Getting to know our patron saint”