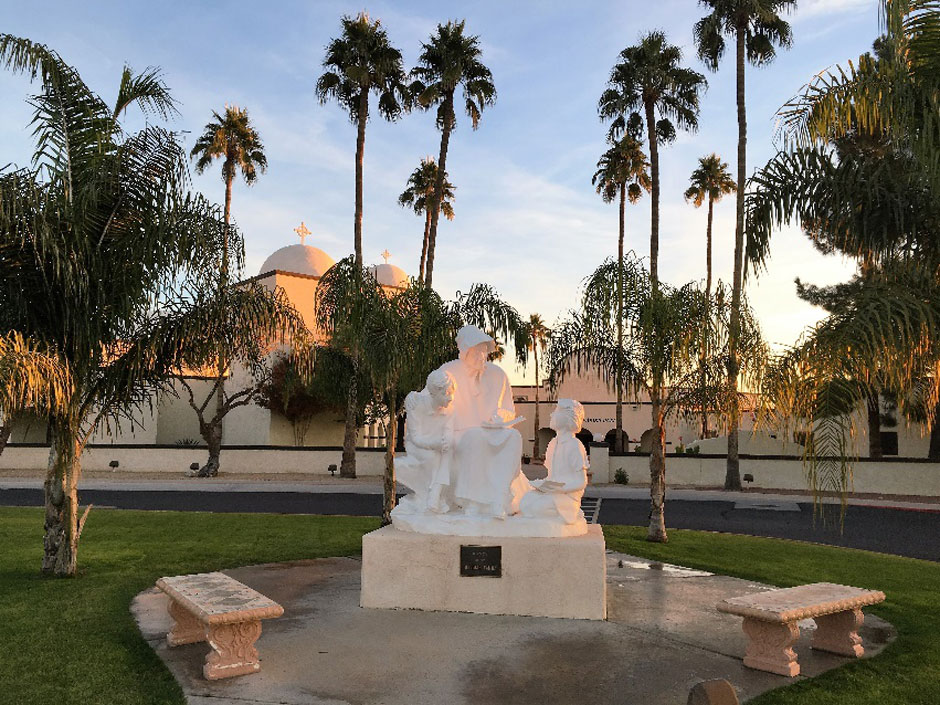 As the Sun Cities continued to grow during the 1970’s, church membership also increased at the two existing Catholic parishes in the area. Aware of the need for an additional church, the Diocese of Phoenix determined that a third parish would be necessary to accommodate the needs of Catholic families newly arrived in Sun City. On July 14, 1976, then Bishop Edward McCarthy officially announced plans to build Saint Elizabeth Seton Parish, the first parish in Arizona, to be named after an American born saint.

The site chosen for the new church, situated on 7 and one-third acres, would be located at West Palmeras Drive and 98th Avenue. On May 6, 1978, Father Paul P. Smith, the founding pastor of St. Elizabeth Seton, dug the first shovelful of earth at the groundbreaking celebration. The following year, on July 14, 1979, the first mass was celebrated by the Most Reverend James S. Rausch, then bishop of the Diocese of Phoenix who, on Oct. 21st, also presided over the dedication ceremony. Since Father Smith’s direction, six more pastors have served at St. Elizabeth Seton, Fr. Henry Hodges (1980-1986), Fr. Matt Feit (1986-1993), Fr. Joseph Gillespie (1993-1999), Fr. Franklin Bartel (2000-2010), Fr. Joseph McGaffin (2010-2016), and currently Fr. Kilian McCaffrey.

The architect hired to oversee the plans for the church was Mr. Bennie Gonzales, a native Phoenician, who was familiar with Southwestern motifs, something the Diocese believed should be reflected in the design of the new church. The new parish would consist of a church, rectory, and social hall. Built within a retirement community and consisting of neighborhoods mostly made up of one story structures, Gonzales created a plan inspired by old Spanish missions. The parish design included dome capped, two story towers visible from a distance, semi-circular passageways, arched windows and doorways, and an open courtyard. The spacious interior of the church was achieved by constructing a barrel-vaulted ceiling with stained glass windows on either side of the arch, and a glass mosaic image of the Risen Christ created the focal point for the altar.

Over the years, adaptations have been made to the buildings at St. Elizabeth to ensure safety, make repairs and refresh the look of the structures, and to meet the needs of a diverse congregation that consists of year-round resident retirees, winter visitors, and young families with children. The sanctuary was remodeled to reduce the number of steps up to the tabernacle/altar to make entering and exiting for priests, deacons and altar servers safer. Seton Hall and the exterior of the church have been repainted, pews reupholstered, a new parking lot installed, carpet has been replaced with tile on the floor of the sanctuary, and the altar and pulpit, originally marble, are now a dark brown wood. The parish office area, where the Fatima and Guadalupe Rooms are now located, once served as the residence for parish priests until the early 2000’s when the Diocese purchased a house in the neighborhood, freeing up space for meeting areas for various church groups and youth and adult educational support. Although the church seats approximately 700 people, overflow seating can be accommodated in Seton Hall, which seats about 400 congregants during the holidays and winter months when there is an increase in mass attendees. Under the leadership of Fr. Kilian, an adoration chapel was built, and two portraits of St. Elizabeth Seton now flank the church altar.