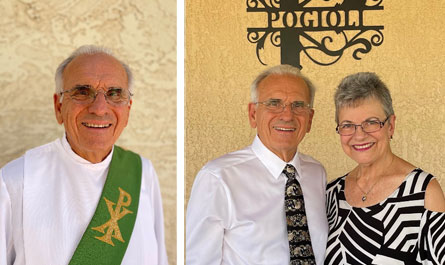 Deacon Marty has a voice perfectly suited for speaking, deep, clear, and warm, inviting to listeners whether delivering a homily or speaking, as we did, on the phone. Open and kind, he often uses the phrase “I am blessed” when sharing his life story.

The oldest of 6 children, Martin Pogioli was born, grew up, and spent most of his life in Pekin, Illinois, a community less than 15 miles from Peoria. Raised in the Catholic faith, he attended the same parish in Pekin, St. Joseph Catholic Church, that in 1988 he was ordained in as a deacon. All of his extended family lived in Pekin (most still do) and he remembers “I often rode my bike to go see aunts and uncles.” His dad, a “strong Italian father,” was one of his greatest inspirations because he “emphasized faith, family, and hard work and was a great example.”

Married in 1967, Deacon Marty and Barbara just celebrated their 55th wedding anniversary. “It was love at first sight, at least for me,” Deacon Marty says of his first meeting with Barbara in 1962, both of whom were attending Pekin Community High School. “Barbara invited me to a social function…”a cheerleading banquet” he recalled, and adds with a bit of a laugh, “Later she invited me to a Sadie Hawkins dance, so maybe she did like me.” They are blessed with three children. Their oldest, a son, still lives in Illinois, while one of their daughters resides in Michigan and the other in Los Angeles. They have four grandchildren and two great grandsons, ages seven and five.

Having attended the University of Illinois and then completing his education at Bradley University in Peoria, Deacon Marty earned an engineering degree and a Master’s Degree in Business Administration. This engineering/business combination proved to be a great asset for his work at Caterpillar, a company known for manufacturing large-scale equipment and engines. His career with the company began during his college years thanks to an engineering co-op program offered through the university. He worked in various capacities including Engineering, Purchasing, and Research, and he would become the first International Buyer for Caterpillar. In 1991, his job took Deacon Marty and his family to Geneva, Switzerland, where they would make their home for two and a half years, an opportunity that afforded travel and meeting people from all walks of life. Serving as a deacon in an English speaking church “with 105 different nationalities represented,” and where everyone was “very welcoming,” Deacon Marty describes this time as one of the “most enriching” experiences in his life. Asked if he learned any foreign languages, he jokingly replies, “No, but I learned to eat and drink in five different languages.” His working relationship with Caterpillar would span 42 years until his retirement in 2009.

After spending a number of years (2005-2017) as snowbirds, Arizona became Barbara and Deacon Marty’s permanent home in 2018. He describes his faith as being “fundamental” in his life and an “essential part of marriage because a shared faith makes a relationship very solid.” He explains, “Everyone has challenges in work, raising children, and all the ups and downs of life; faith helps you get through these things.” Deacon Marty says his favorite aspect in serving as a deacon in the Church are the opportunities to “interact with people,” whether through spiritual retreats or tending to those who are suffering. He has especially enjoyed performing baptisms and weddings for family members, prompting Deacon Marty to say again, “I am blessed.” 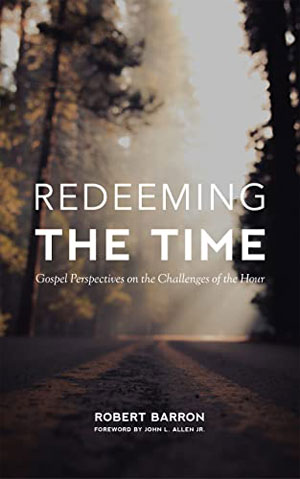 For an inspirational and topical read, Deacon Marty recommends Bishop Robert Barron’s “Redeeming the Time: Gospel Perspectives on the Challenges of the Hour.” This 296-page book is a collection of essays that Deacon Marty feels delivers a message of “hope and encouragement” during challenging times. Published on May 16, 2022, by Word on Fire Institute, the book is available in paperback and in digital form (Kindle), varies in price (anywhere from $39.00 to $7.99), and can be found through Amazon, the Word on Fire Bookstore (a nonprofit organization), and Sunrise Marian Distribution.