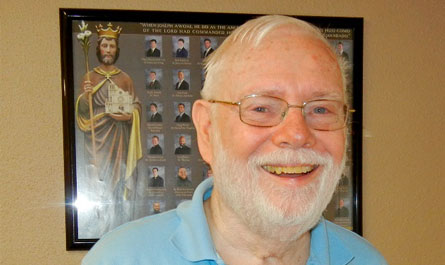 Inspired by a number of family members dedicated to religious service, including a twin sister, an older brother, and an uncle, serving in the Church seems to be at the core of Father John’s being. His path to becoming a priest, as well as his later retirement, would take a few detours along the way, yet he was always guided by his need to serve.

Father John Slobig was born in Chicago Heights, Illinois, and grew up in a suburb of Chicago called Homewood. He and his twin sister were the youngest of six children in a Catholic household. He attended St. Joseph’s Grade School in Homewood, Quigley Preparatory Seminary High School in Chicago, and went on to attend Holy Cross Seminary College in La Crosse, Wisconsin. After two years at Holy Cross, health issues made it necessary for Father to take time off from his studies. While visiting with a grade school friend, his friend’s dad asked Father John if he’d be interested in a position with his bank. What began as a part-time job turned into a 22 ½ year career with Continental Bank of Chicago, where Father would eventually manage some 70 corporate tellers.

During these years, Father says “I remained active at St. Joseph, serving as a Eucharistic Minister, a lector, and teaching CCD (Catechism) classes.” The pastor “kept after me”, Father remembered with a smile, “to get into ministry” and so he began looking for a diocese to accept him. In June 1985, while visiting another friend in Arizona, he decided to contact the Diocese of Phoenix. After obtaining a meeting with the Vocation Director, going through an interview process, and meeting with then Bishop Thomas O’Brien, Father John learned in July of his acceptance. Since he didn’t have an undergraduate degree, Father completed the coursework for both his bachelor’s and master’s simultaneously, attending undergraduate classes in the mornings and sometimes evenings, and seminary classes in the afternoons. He earned a BA in Religious Studies and a Master of Divinity five years after beginning his journey to the priesthood. On June 2, 1990, Father John was ordained at Saints Simon and Jude Cathedral in Phoenix.

Father John’s first assignment was at Saint Joan of Arc Parish in Phoenix, and over the years he would go on to serve at a number of parishes in the valley. After serving for 13 years at St. Clement of Rome in Sun City, Father retired in 2017. His retirement was short-lived, and the following year he was asked to take what he was told would be a “temporary assignment” at St. Gabriel’s in Cave Creek. This assignment evolved into two years after the regular parish priest resigned because of health concerns.

In 2020 Father took what he refers to as his “second retirement”, and that same year his twin sister passed away. Father describes this time as “very hard” because he had been unable to attend her funeral due to the pandemic. Retirement proved challenging; he “wasn’t really doing anything” and he felt he was “literally dying each day.” Father knew he “had to get back into ministry.” He began inquiring about any parishes in need of an associate and, in April 2022, Father Kilian welcomed Father John to St. Elizabeth Seton. Though he carries the official title of Priest in Residence, he has the same duties as a “working priest.” Father John says of being a priest, “It’s everything I thought it would be and then some. I was ordained to serve in whatever capacity I’m needed. I am happy to serve.”

3 thoughts on “Out of Second Retirement & Happy to Serve” 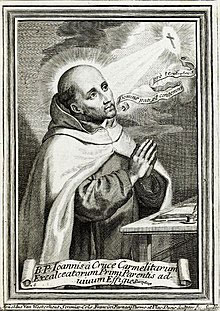 Saint John of the Cross is Father John’s patron saint and one that he greatly admires. Saint John of the Cross was born June 24, 1542, in Avila, Spain, and grew up in poverty after the death of his father. When he was older, he attended a Jesuit school, joined a Carmelite Society, became involved in the efforts of St. Teresa of Avila to reform the Carmelite Order, and went on to form a new monastery for Carmelite friars. After having a vision of the crucified Christ, Saint John drew a picture of Christ “from above” which, hundreds of years later, inspired the artist Salvador Dali to create Christ of Saint John of the Cross. Saint John died on September 14, 1591. 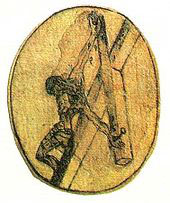 3 thoughts on “Out of Second Retirement & Happy to Serve”