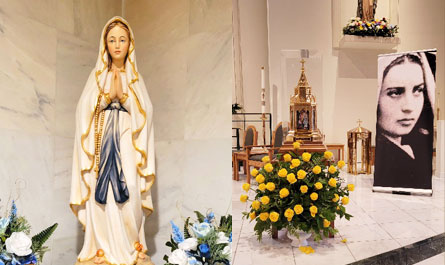 Bernadette Soubirous was granted visions of the Blessed Mother near Lourdes, France in 1858. Her experiences would eventually lead to the establishment of the famous shrine, Our Lady of Lourdes. For the first time, in the spring of 2022, the relics of St. Bernadette left France to embark on a four-month tour in the United States, visiting 42 parishes. The beautiful reliquary containing the relics traveled from Miami, Florida, through the Midwest, up to Montana, and down to the southwest, stopping on July 28th at Our Lady of Lourdes Parish in Sun City West, and ending in California.

Lourdes is situated in the foothills of the Pyrenes Mountains of southwestern France near the border with Spain. Born in January 1844, Bernadette Soubirous was the oldest of nine children. When she was small her family thrived, but by 1858 the family was impoverished and living in an abandoned prison that was deemed too unhealthy even for prisoners. The family had a harsh existence, with alcohol abuse and poor money management among their difficulties. Bernadette received little schooling due to having to watch her siblings so her mother could work. While she was out looking for wood one day, a lady in white appeared to her in the Grotto of Massabielle. Startled by the vision, Bernadette immediately began to pray the rosary, and the Lady joined her. It was the first of their 18 visits that occurred from February to July, 1858.

Large crowds began to gather as the visions continued. Some who came were believers but many others just came for the spectacle or thought of it as superstitious nonsense, fairy beliefs. On the ninth visit, the Lady asked Bernadette to dig in the ground of the grotto in search of a spring, and in the following years a church would be built over the discovered spring. Probably one of the most difficult revelations for Church officials to accept had to do with what name the Lady gave herself. When asked about this, Bernadette said her response was “I am the Immaculate Conception.”

Bernadette was interviewed many times by civil and church officials. It is said that she never wavered in relating the events as they happened to her. Since she could not write at that time, her words were recorded by another. Occasionally, when they were read back to her, Bernadette found them incorrect and she would ask for corrections to be made.

Within that year thousands began to come to the grotto. It was becoming a tourist attraction and those in civil authority were not happy. By the summer of 1858, public access to the Grotto was forbidden, but the public came anyway. In July, the Catholic Church began a serious inquiry. A commission was appointed and information on the cures attributed to the spring was gathered and analyzed for two years. Of the hundreds of medical cases reviewed, six were accepted as being beyond scientific explanation. After submitting the findings to the Bishop, the Church purchased the Grotto and its surrounding land. Bernadette had continued to live with her family and often was berated by strangers. Admission to a local convent at a border was arranged.

On 18 February 1862, the Marian apparition officially became known as Our Lady of Lourdes. Bernadette joined the order of Sisters of Charity of Nevers, where she took care of the sick and the poor. Although often ill herself, it is said she had a joyful character. Being struck with tuberculous, her life ended in her thirty-fifth year, 1879.

As part of the canonization process, her body was exhumed three times. It was declared incorrupt in 1925 and still lies in a crystal casket. On 8 December 1933, Pope Pius XI declared Bernadette Soubirous to be a saint of the Catholic Church.

Bernadette’s strong faith in meeting the challenges of doubters was phenomenal. She never inflated her importance. Simplicity and calmness walked with her, and her seeming indifference to her detractors was remarkable.

God does not judge us by appearance, education, or wealth. It is our heart.

St. Bernadette, pray for us.