The Advent and Christmas seasons are arriving soon. Time to decorate our homes and churches with trees, wreathes, and crèches. There is shopping, baking, gift-giving, maybe a children’s Christmas pageant to experience. Don’t forget to schedule in a Christmas concert. When do you start singing or listening to Christmas carols? “Away in a Manger”, “Silent Night”, “O Little Town of Bethlehem” are long time favorites. Some churches may have an outside living crèche complete with a babe in the manger, mules, goats, sheep, maybe a cow or pony.

Saint Francis of Assisi wondered that very thought. His way of life was to follow in Jesus’ footsteps- to live the Gospel. In 1223, St. Francis wanted to experience the Incarnation for himself-as much in reality as he could- and to share the same spiritual experience with others. He and some of his fellow Friars Minor were staying at a hermitage outside of Greccio, Italy in December. He asked a nobleman, John of Greccio, for assistance in creating a living manger scene. Word soon went around town about something extraordinary that was to occur at midnight Mass at the hermitage on Christmas Eve.

Imagine a cold December night in the Middle Ages- no street lights, no electronic billboards, just the dark night with only the stars and the moon. You are wrapped in warm wool and light a torch. There is the muffled sound of your neighbors greeting one another. Watch the lit torches bounce and weave as the people of Greccio make their way on the darkened path. All is ready- the altar is set for Mass. Before it is a manger with a baby warmly wrapped in swaddling clothes. Beside the manger are ox and ass- their breath visible in the torch light.

There at the hermitage of Greccio, the townspeople witnessed something new: a reenactment of the birth of Jesus that had never been done before. The church had focused on the Lord’s Passion and Resurrection, but rarely had there been an emphasis on celebrating the birth of Jesus Christ. Christmas Mass, yes, but a celebration of the birth as we do today, no. Here was Francis before the altar, before the manger, before the cross. Francis reached for the baby, and saw the Incarnation before him. It was all there as one: the Incarnation, the Cross, and the Eucharist.

The joy of this first crèche scene was such that Francis and the Friars Minor created one at Christmas time at the altars in churches wherever they went. And thus the tradition was created. Perhaps you can display a miniature crèche all year round near a cross, for there isn’t an Easter without Christmas. 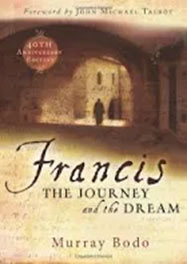 I highly recommend two books to learn more about St. Francis of Assisi and the beginnings of the Franciscan Order. Murray Bodo, OFM has written many books on Franciscan topics. His book “Francis: the Journey and the Dream” is lyric, a quick read, and very informative. Dominic V. Montini, OFM, has written a short history entitled “Francis and His Brothers”. You will find in both books the stories of the first living crèche, the creation of the Canticle of the Creatures, and St. Francis’ interactions with creatures and people. I also recommend the 1972 movie “Brother Sun, Sister Moon”, directed by Franco Zeffirelli.