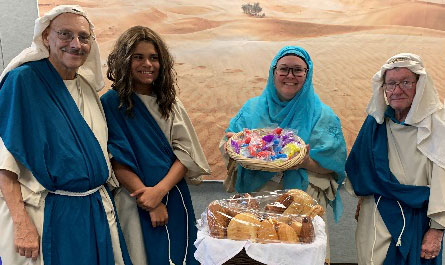 And so it began, in the third week of July, when the heat is on in the desert, but cool inside the parish hall. There the hearts of more than 40 children were in attendance at the second annual St. Elizabeth Seton Vacation Bible School (VBS). Together with excited volunteers they learned about Jesus and their relationship with Him through five evenings of discovery. The program ran from Monday to Friday, starting at 5:00pm and ending at 8:00pm. Each day had a theme and scripture through which the children could discover Jesus.  The parish hall was the gathering area as the day began with worship, song and drama skits depicting the theme of the day’s story. At the conclusion of the worship the children gathered into four groups, each with an adult leader.  Each group had their own biblical name that they followed for the week.

There were four activity areas within the campus that the children visited on a rotating basis.  These were the Bible Room, Craft Room, Theater Room, and Activity Room Area. Each room was decorated and the leaders of the rooms led the sessions based on the story of the day.  The children experienced activity, storytelling, and participating in crafts and drama and fun times, with games to burn off some of their energy.  Snacks were provided in the middle of the daily sessions, and they too were well thought out in relation to the theme of the day.  At the end of the day, we gathered in the hall again to worship with song, and the children had an opportunity to tell us what they had learned.

An example of how a session began was the theme “Discovering Jesus in the Temple” and hearing the passage, “Let the children come to me, it is to such as these that the Kingdom of God belongs.”. Volunteers prepared a classroom or library so that each room reflected its theme. For example, the Bible Room featured different wall displays depicting a temple in Jerusalem and a road to Emmaus, complete with a cobblestone walkway and symbols.  Each room was set up to let the children discover and find Jesus for themselves in their midst.

The volunteers started weeks before preparing their rooms, purchasing materials, and designing their own costumes to take on the character of those during the age. Wanting to hold down the costs, they turned single bed sheets into robes, and dyed material for sashes. The days were not ordinary formation classes but exciting and interesting hours filled with the WOW! factor, with open eyes, lively music, gifts, and a closer discovery of Jesus within their hearts.

This year the children were given the opportunity to write a note of affirmation to another friend or an adult. Many adult volunteers received thank you cards from those in attendance. On the last evening we had a special celebration at snack time with pizza, and at the end of the evening, when the parents picked their children up, they heard the stories of what happened and the children singing the songs they learned and how they discovered Jesus that day.

We wish to thank the many volunteers, both adults and youth, who gave time, talent and treasure and monetary gifts so that this 2022 VBS would be a success. We wish to thank the Knights of Columbus who donated the cost of the tee shirts that were given to every attendee, both child and volunteer. A special thank you to Fr. Kilian for allowing the parish to conduct this learning event, but most importantly we thank all of you who gave various items that were needed, or donated funds so that everything could be acquired to make St. Elizabeth Seton’s 2022 VBS a success.

One thought on “From the Temple to their Hearts”

One thought on “From the Temple to their Hearts”