The time of Jesus was riddled with riots, resistance and a Judea wanting to once again be free from a rule that was thrust upon them. Jesus was looked upon as the Messiah and wasn’t truly proven to be one until after His death and Resurrection to those around Him.

There were several sightings that occurred after the Resurrection. The flock still needed to be shepherded, so we have fifty wonder-filled days between Easter and Pentecost to keep in mind as we ourselves try to be a good flock to the Lord.

Within the first week after the Crucifixion, Jesus appeared to his disciples many times. When Mary Magdalene was going to the tomb to perform the tradition of dressing the dead, she found the empty tomb. No one knew what had happened to Him.

Jesus had been persecuted as a criminal and many of the followers were either in hiding or had left town. They too were afraid of being taken to the cross. They hadn’t figured out yet that all of this suffrage had to happen to fulfill the Word of the prophets. Cleopas and another were on the way to Emmaus, a village situated about seven miles from Jerusalem. They were talking about all that had happened with the sightings of Jesus, the disappearance of His Body from the tomb, and the Crucifixion. There were so many things swimming around in their heads that they didn’t notice the man who joined them on their walk.

With all that was told to them about the Scriptures by Jesus, they were burning with the Spirit as they rushed back to Jerusalem to tell their friends their story. Jesus appeared once again to the eleven so that He may speak to them, as they were still unbelieving of the wonderful works that had been seen. It was time that the apostles knew what their grand task would be. It was their turn to open the world to the Lord and His teachings.

On another night Peter, Nathanael, Zebedee’s sons, Thomas and two others went out fishing to no avail. They cast their nets all night long in the Sea of Galilee, but no fish were caught.

At this morning meal Jesus tested Peter on his love for Him. It was now that Jesus showed Peter what would become of his life. He was to be the rock on which the Church would form.

In the remaining weeks leading up to the Ascension, Jesus appeared to hundreds of people at one place, and then by James and all the disciples. Now forty days had passed since the resurrection, and Jesus summoned the apostles to Mount Olivet in Bethany. Still not understanding the next step, they asked Him if rule was going to be restored in Israel yet. Alas, it was not the time, nor would they know when that would be. Jesus upon saying this ascended into heaven upon a cloud. Unable to comprehend what had happened, the apostles stood there amazed at what they had witnessed. Angels came and sent them away, and they returned to Jerusalem.6

While the twelve went on to minister, another ten days passed and the Feast of Pentecost was upon them. Thousands were gathered this day in Jerusalem.

It is here, at this time and this place that Christianity began to spread like wild fire. It is at this moment in history that we see our ministry to each other every day and at every Mass. Those fifty wonder-filled days are the days that marked our growth and understanding in Him. 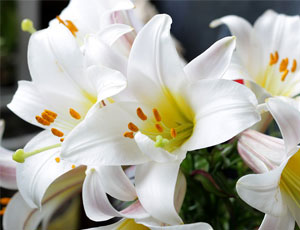 What does the Easter lily symbolize?
Mentioned much in the Bible, the white lily symbolizes purity, rebirth, new beginnings and hope and is most often associated with the resurrection of Jesus Christ as observed on Easter.