Father Tom greets me with a cheery “hello” upon answering his phone. He is blessed with that rare quality of having both a reassuring and assured voice that invites you into conversation.

Father Thomas Joseph Suss was born on Sept. 5, 1944, in Tacoma, Washington. Baptized into a Catholic family, he was raised by his widowed mother. Father Tom, the youngest of 6 children, was a little over a year old when his dad passed away. His mother moved the family to Fife, a small farming community just outside of Tacoma, where he attended grade school and Bellarmine Jesuit High School.

As he grew up, Father Tom realized he “envied friends with dads” and, at the age of 12, he got the idea that he “could choose a father.” He began purposefully observing men in his life. The criteria he would use to make his decision would be based upon careful attention as to how these men treated others, their wives, children, friends, and strangers. Father ended up choosing four men who had so impressed him with the way in which they conducted their lives, Father decided he wanted to “pattern” himself after them. These men would remain in his life always. One Father’s Day, when he was 26 years old and on a visit to Rome, he wrote a letter to each of them. He shared with them the choice he had made so long ago, and the invaluable impact the learnings gained from their examples had on his life. Years later, at the funeral of one of his chosen fathers, he learned that the letter he’d written was still in the man’s wallet. Father Tom fully believes that “God gave me the inspiration to turn something negative, like losing a father, into a positive.”

Father Tom would go on to attend Seattle University for 1 year; Jesuit Seminary for 1 ½ years; and 3 years at the University of Washington (“Go Huskies,” Father good-humoredly adds) obtaining a degree in Recreation Education. Father loved traveling, and hoped his degree would eventually lead to a career as a cruise director. He had, however, always had an “attraction to mystery and things not easily understood.” From his earliest memories Father had a “fascination with God,” the “Greatest Mystery,” and he believed in the specialness of individuals and the importance of reaffirming that everyone is unique and important. He entered St. Thomas the Apostle Seminary in Kenmore, Washington and, in order to work his way through school, he obtained a job as a Seattle Transit bus driver. The work enabled Father to interact with many different kinds of people, something he has always enjoyed. One day, a friend got on the bus and observed Father’s many “good mornings” to passengers boarding the bus. Later, his friend commented on how each one of those greetings came across as if it were meant especially for that person. On June 2, 1973, after completing his studies, Father Tom was ordained at St. James Cathedral in Seattle.

Asked about the most joyous aspects of being a priest, Father Tom says it’s celebrating Mass, “that’s a given.” Father adds that the “privilege of hearing confessions” is also a wondrous experience because it affords people the opportunity for “renewal,” allowing them to be reconciled to God and the Church. Most importantly, Father says he wants people to feel “lifted up even when they may be experiencing the worst time in their life.” Father Tom’s exceptional interest in and love of people seems to guarantee that will be the outcome.

9 thoughts on “Getting to Know Father Tom Suss” 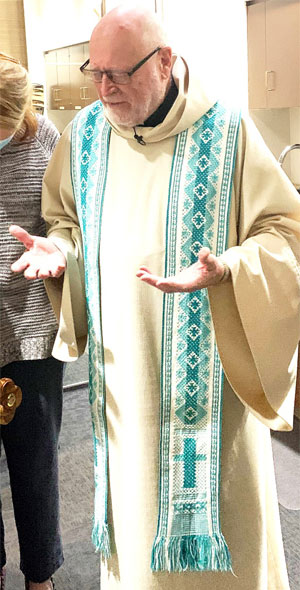 When he has time, Father Tom enjoys exercising in the pool, traveling or any adventure he can share with other people, and reading. His favorite book is the Bible.

THE ULTIMATE GIFT OF LOVE

Tis just a fleeting moment that we are here
In which to dash our mark
For all the world to cheer.
Priests and Deacons—your lives
Are but a collage of Christ-like encounters
Your prayers…A joy of immeasurable pleasures.
My friends, you have been chosen by He who is on high
To shelter all the gifts of earth
To which we only try.
Such a task it is that you’ve been given
To share with us your thirst for heaven.
In the face of adversity and sorrow
You will emerge triumphant…
Without the pain that comes in life
We’d know the joy—know only strife.
Your charted course is set…
God sent you here my spiritual friends
To calm us in our fears
As the promise of tomorrow nears.
We are awestruck by your outer strength
Replenished by your inner soul.
Renew within our precious hearts—A reflected image
That guides us in or lifetime goals.
So as you sit and contemplate your tasks that lie ahead
Just know we share God’s gift of love,
The “stars” he fashioned from above
So blessed we are in you!

9 thoughts on “Getting to Know Father Tom Suss”