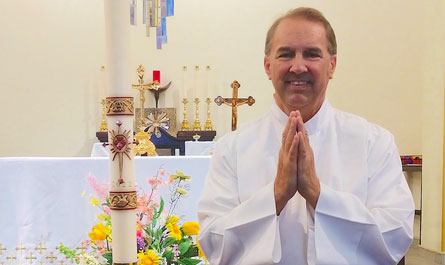 And if you don’t know him, You will now!

Born and raised in a Catholic home in Concord, California, at a young age Mike began to learn the importance of serving others. His parents, who always “set good examples” for Mike and his older brother and sister, encouraged him to become involved in the church as an altar boy. Always a bit shy as a child (“I still am” Mike tells me) he enjoyed serving in this capacity because it “helped bring me out of myself.” Mike smiles and his face brightens when he speaks about service. He believes an “important component of faith is being involved and serving” and his evident love in helping others seems to be a natural part of his being.

After completing a couple of semesters at a junior college, Mike went to work for his father, moving to Alameda in his mid-twenties. His father and a partner ran an auto body shop and, after his father bought the partner out, Mike and his dad managed the business together. Eventually, Mike took over and ended up employing both his siblings.

Mike retired in 2006 and relocated to Sun City, settling into a house he initially purchased as an investment while still living in Alameda. The house was right next door to the home of his parents, who had moved to Arizona some 25 years earlier. Although his dad passed away in 2004, Mike’s 87 year old mother still lives next door in her own home. Mike likes being close to his mom so he can be there to “help her out whenever she needs me.” Both of Mike’s siblings also live in Arizona and he has two nieces and one nephew (now deceased), and a number of great nieces and nephews scattered about the United States.

Attending and volunteering at church continues to be an integral part of Mike’s life and Catholic faith. He believes faith “keeps me grounded and helps me think spiritually.” When he first came to the area and to St. Elizabeth Seton, he got involved in the Hospitality Ministry and says he “enjoyed greeting and meeting parishioners.” He seems to be involved in every aspect of service and ministry in the Church. He has been the president of the parish council for seven years and on the council for ten years. When asked about the council’s role, Mike explains they are the “eyes and ears of the parish and an advisor to the Pastor. We provide suggestions for things to be implemented.” One such suggestion was the Adoration Chapel which is now a beautiful space for prayer. He assists in the Funeral Ministry, requiring his attendance at Masses for the deceased. Mike is also a Sacristan, charged with the care of the sacristy and the “behind-the-scenes preparation,” and he trains the altar servers. He attends mass almost daily, often assisting on the altar and willingly fills in for a server who might be absent.

As our conversation winds down, I ask Mike if there’s one particular ministry he is especially drawn to and his answer is immediate. “Oh, training and working with the altar servers and encouraging them. It’s wonderful to see their confidence build.” It seems that the lessons and ministry from his youth are still those closest to his heart and giving nature. It seems quite fitting that Mike’s favorite saint is St. Michael the Archangel because “I have the feeling of being a guardian and protector of our Church.” Mike is a true and joyful servant who “offers to help” wherever and whenever he is needed.

Mike’s favorite ministry is working with and training the altar servers. Age is not a requirement as servers of any age can volunteer. Training can last between 4-6 weeks depending upon how quickly the person becomes familiar and comfortable with the duties. A perspective altar server receives a list of what is required during the Mass, the list is reviewed, vestments are provided, and then hands-on training begins in the sacristy. The Sacristan (Mike) shows the servers where everything is located and how to assist the priests and deacons during the celebration of Mass. Mike serves with the new altar servers for their first few weeks “on the job.” 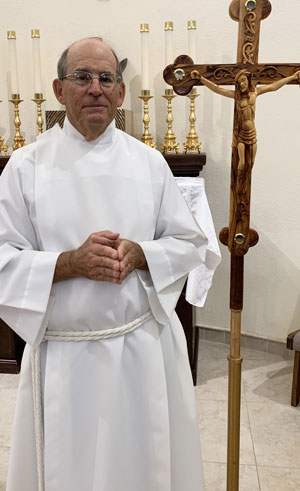