If you mention the name Bernard Nathanson in a room full of Catholics, many will probably say they never heard of him, but at least one priest described his conversion as one of the most important things which happened to the Catholic Church in the 20th Century.

Bernard Nathanson, M.D., was probably the one person most singularly responsible for the legalization of abortion in the United States. Years before the Supreme Court decision Roe vs. Wade in 1973, Dr. Nathanson fought for abortion rights while also performing abortions himself. He was involved in approximately 75,000 abortions, including that of his own child, an act which Dr. Nathanson described he coldly committed with no emotion other than “the sense of accomplishment; the pride of expertise”.

Dr. Nathanson was born into a Jewish family but became an atheist. He founded NARAL, an organization which supported the legalization of abortion, in the late 1960’s. In order to gain public and media support, Nathanson blamed the Catholic Church for the deaths of women victimized by illegal abortions, grossly falsifying and inflating the number of these deaths.

In the early 1970’s, Dr. Nathanson became the director of The Center for Reproductive and Sexual Health in New York, then the largest abortion clinic in the world. While he was running this clinic, he also traveled all over the country, lobbying legislatures and politicians to legalize abortion. He became known as the “abortion king”.

Due to this hectic schedule, Dr. Nathanson became exhausted and left the clinic, settling in as chief of obstetrical services at a hospital. It was during this time that a marvelous new technology was coming into use at the hospital — ultrasound. He began to do experiments using ultrasound, observing the baby’s reaction while he played music in a tape player and held it against a womb. He saw that when he played Mozart, the baby hardly moved, but when he played Van Halen, “the baby was jumping all over the place”. For the first time, he began to have doubts about what he had been doing. He asked one of his associates, who had been performing as many as 20 abortions a day, to record these abortions using ultrasound. When the two doctors observed the tapes later, his associate never performed another abortion. Dr. Nathanson himself stated that he was “shaken to the very roots of my soul by what I saw”.

Following this, although he had stopped doing abortions, Dr. Nathanson spent a period of 10 years tortured by the guilt of murdering so many innocents. His grief and inability to cope with this turned into despair. He sought comfort in self-help books, counseling, and other secular remedies, but to no avail.

He became involved with the Pro-Life Movement, but initially made it clear to their members that he did not share their faith or belief in God. That changed after he attended many rallies and observed first-hand the unselfish love that the pro-life participants had for everyone, including the confused and frightened pregnant women, the doctors and nurses at these clinics, and the police and media present. For the first time in his adult life, he became aware of God and His mercy and redemption, and realized that “Someone had died for my sins and my evil two millennia ago”.

On the Feast of the Immaculate Conception, in 1996, Dr. Nathanson was baptized and confirmed into the Catholic Church at St. Patrick’s Cathedral in New York City. He became a warrior for the unborn, for those he had once persecuted, and was referred to as a modern day St. Paul.

His astonishing story offers hope and encouragement to everyone.

The Hand of God:
A Journey from Death to Life
by the Abortion Doctor Who Changed His Mind 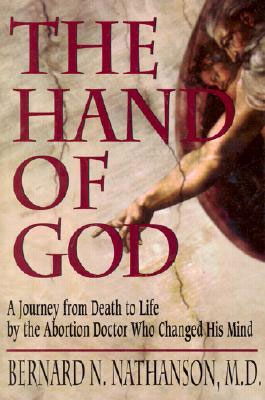