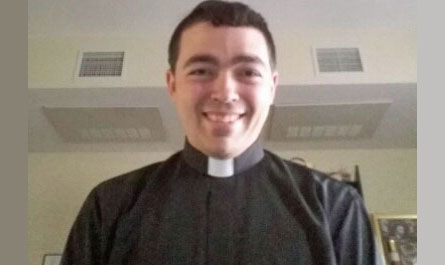 “Come & See” is what Fr. Joseph McGaffin, then pastor of St. Elizabeth Seton Church (2010-2016) told Andy Geerling, when Andy asked as to what a priest does besides preside at mass. And Andy did go and see. He followed him at mass. He followed him to two nursing homes. He attended several meetings with him, and he went to a home to anoint a dying parishioner. And through all this following, Andy got a better understanding of what it meant to be a priest here in the Diocese of Phoenix, and his fire was lit.

It was during his high school years that Andy’s rousing fire provoked his interest about Jesus Christ and the calling to ministry. When he told his parents, Mike & Cindy, about his thoughts, they felt it was a blessing for him and them. “If it is God’s will, he will have the courage to pursue it. We are happy he is discerning,” said Cindy. The Geerling’s are a wonderful family who attend church regularly, are active in the parish, and have instilled in their family the promise given at baptism: to love, honor, and bring up their children as faithful Catholics. So, with his parents’ blessing, the thought of someday being a priest and serving in a parish ministry filled him with great joy.

After being accepted in the diocese, he pursued his degree at the Pontifical College Josephinum in Columbus, Ohio. Graduating with a Bachelor’s degree in Philosophy, Andy took a year off to discern. With COVID and the changes of life spinning all around him, he remained in formation at Nazareth House, the dioceses’ house of study. In 2021, Andy began study at St. John Binary Seminary in Denver, Colorado, with his spiritual year. And what is a spiritual year you might ask? As Andy says, “Everyone who goes through this year of spiritual growth, will tell you they loved it, but they don’t want to repeat it.”

The year consists of stopping all forms of media. No cell phones during the week. No music, TV, or any connection outside. A typical day begins at 5:30 AM. Holy Hour starts at 6:00 am. After that meditation hour, morning prayer is said as a class. That is followed by two hours of interior time and classes from 10am -12 noon. At noon they celebrate mass, followed by lunch. After lunch there is an hour of maintenance and cleaning, or they might go to a high school and teach a class. With a few hours down time, it’s evening prayer, dinner and some time to relax. They end the day with night prayer at 8:45 pm. Every minute of the day is scheduled.

During this year, the classes they take are not for credit, but are for personal spiritual growth. Andy says it is such a blessing, since there is no pressure, you can be okay with failure. This spiritual year ends in June, with a 30-day silent retreat.

So, what’s next on his calendar? In January, Andy begins what he referred to as a Poverty Inversion- Servant-Obedience time. He does not know where he is going. He says: “they give you a bus ticket and send you off.”

If it is his calling and God’s will, Andy Geerling will become Fr. Andy in 2026, and he hopes to become an associate at a parish within the diocese. Andy Geerling — a seminarian from our St. Elizabeth Seton family. Someone you should know, and pray for.

3 thoughts on “Our Own Seminarian: Learn About Andy Geerling” 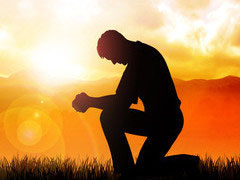 A Prayer for Vocations

Almighty and eternal God,
in your unfailing love you provide
ministers for your Church.
We pray for those whom you call
to serve the Church of St. Elizabeth Seton as priests. Inspire in them a generous response.
Grant them courage and vision to
serve your people
May their lives and service call your
people to respond to the presence
of your Spirit among us
that, faithful to the Gospel and
hope of Jesus the Christ, we may:
announce glad tidings to the poor
proclaim liberty to captives,
set prisoners free
and renew the face of the earth.

3 thoughts on “Our Own Seminarian: Learn About Andy Geerling”